10 games to play with a ball 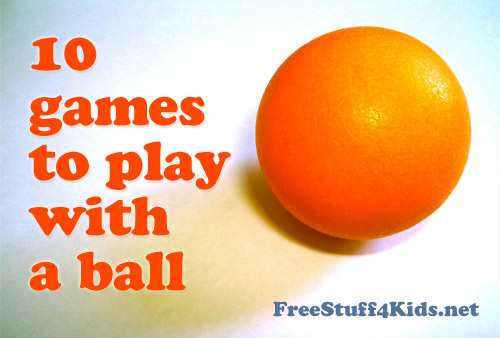 Now that summer is upon us, and the kids are home from school, keeping busy and active is an everyday challenge. Thankfully, if you have some balls around, the games you can play are almost endless. Here are 10 ideas for things to do with the kids using a ball:

Set up empty bottles and try to knock them down. Turn an open box sideways and try to get the ball in. Set up an arch made of blocks and try to roll a small  ball through the arch without knocking any blocks over.

2. Keep the ball in the air

Best played outside with a light ball like a beach ball- pop the ball up in the air and try not to let it hit the ground. This game is great exercise!

Foursquare is tons of fun – here are the rules. You can draw your “court” with sidewalk chalk, so you can play it anywhere!

Using tennis or racquetball racquets and a beach ball, hit the ball back and forth, trying not to let the ball touch the ground.

Lay a hula hoop on the ground, and give each player several balls. Take turns rolling the balls towards the hoop, trying to get inside, but not roll too far. Bonus points for knocking another player’s ball out of the hoop!

Set up a laundry basket at some distance from the players. Take turns tossing the ball, trying to land in the basket. The bouncier the ball, the harder the game!

There are lots of different ways to play this game. Here is one set of rules, but you can get as creative as you like! The basic premise is bouncing  a ball up against a wall 7 times, then 6 times, the 5 times, etc., each time doing a different trick or different bounce without making a mistake.

This game requires at least 3 players. Two people stand apart, with the third player in the middle, and the outside players toss the ball back and forth while the person in the middle tries to intercept the ball.

With at least 2 players, decide on a category, like animals, or countries for example. Toss the ball back and forth among the players, and each time a player catches the ball, he must name something from the category chosen or he is out.

What are your favorite games to play with balls?